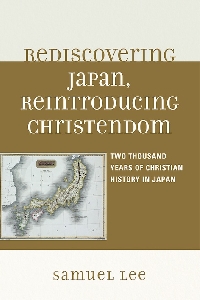 Rediscovering Japan, Reintroducing Christendom: Two Thousand Years of Christian History in Japan
Contact: Dr. Samuel Lee, +31-20-4167308
http://www.amazon.com/Rediscovering-Japan-Reintroducing-Christendom-Christian/dp/0761849491
MEDIA ADVISORY, March 17 /Christian Newswire/ -- In Rediscovering Japan, Reintroducing Christendom Japan's unvoiced Christian history and cultural roots are examined from an alternative perspective. It is commonly believed that Christianity was introduced to Japan by the Spanish and Portuguese missionaries during the 1500s; however, Samuel Lee draws on various forms of cultural, religious and linguistic evidence to argue that Christianity was introduced to Japan through the Lost Tribes of Israel, who were converted to Christianity through the missionary efforts of the Assyrian Church of the East around A.D. 500.
Much of the evidence he discusses has become submerged into many Japanese folkloric songs, festivals and is to be found in temples. There are, for example, approximately 300 words in Japanese and Hebrew/Aramaic that are similar.
Further, Dr. Lee outlines the history of Catholicism in Japan during the 1500s, the systematic persecution of Christians from 1600s to the 1800s, and the rise of the Protestant Church in Japan. The historical portion of the book ends with an analysis and discussion of 21st century Japanese society.
Lastly, in Rediscovering Japan, Reintroducing Christendom, Samuel Lee questions the missiological methods of Western Christianity and advocates an approach based in dialogue between Christianity and other cultures.
For ore information about the book visit http://web.me.com/slwe/Rediscovering_Japan/the_Book.html or check the book at amazon.com
ABOUT THE AUTHOR
Samuel Lee is a sociologist specializing in Japanese society and culture. He is president of Foundation University in the Netherlands and a member of the Christian Sociological Society and Japan Sociological Society of the University of Tokyo.
PUBLISHER
Hamilton Book / Rowman & Littlefield Publishing Group
ISBN 0-7618-4949-1 / 978-0-7618-4949-0
Price 29.95US$
EARLY REVIEWS
"undoubtedly one of the best books available on the 2000 years of Christian history in Japan." --Arimasa Kubo, president, Remnant Publishing & Lecturer on Biblical Japan Forum
"A unique and challenging view of the historic overlap between Japanese Shintoism and Buddhism and Christianity. It is a pleasure to observe the depth of his awareness "--Prof. Toshifumi Uemura, Japan Lutheran College
"[Lee's] research, which has become an enormous source book in the history of Japanese Christianity, culture and language suggests that it is indeed possible that the Japanese people originated from Israel..."--Hiroko Ayabe, founder of Japan Revival Ministries, Tama Gospel Center
"Lee offers a truly unique point of view and necessary commentary on the subject of Christian mission in today's world. This work is to be highly recommended."--Brian McLaren, author, Church on the Other Side and Everything Must Change: Jesus, Global Crisis & a Revolution of Hope
"One of the most exciting and provocative contributions to discussions of global Christianity that I have read in a long time A fascinating, in-depth and detailed portrait His argument is compelling and extremely well-documented..."--Carl Raschke , professor of religious studies, University of Denver, author, The Next Reformation and GloboChrist
继续阅读
点赞 登录收藏 https://chinesecs.cc/1220.html 复制链接 复制链接

Noël Golvers ed. The Christian Mission in China in the Verbiest Era (1999)